The Linnaeus Eco-Tech 2018 Conference organized biannually aims at establishing cooperation among different actors in the Baltic Sea Region. This year, the main attention of the event was focused on the matter of smart water resourcing raised as a topic in the context of the upcoming crisis of drinking water usage, signs of which are increasingly recognized in Sweden. The 11th international conference Eco-Tech was held in Kalmar, Sweden on 19–21 November 2018.

An event filled with parallel sessions, workshops and site visits, Eco-Tech reached out to varied topics under the umbrella of environment and water resources: overcoming drinking water shortage, discussing stormwater management and wastewater treatment, approaching waste management with a circular economy perspective and applying land remediation. During the opening panel, representatives of various professional and national backgrounds raised the key questions for the conference that unite the global world: how to remove pollutants from water basins, how to organize and optimize waste management, and how to ensure a high level of water purification.

What are the problems that we can expect in the future? During the panel, speakers named several tendencies recognized today.

Currently we are facing the problem of microplastics and pharmaceuticals contaminating waters. Plastics in the ocean are affected by different meteorological conditions, and, when accumulated in waters, they not only are eaten by the fish we might later consume, which can lead to certain health risks, but they also release the chemical contamination to the water. Further, in the sphere of pharmaceuticals new drugs are constantly developed that eventually pollute waters requiring tailored approach to the purification process.

Representative from a German research center pointed out the problem of not only micro- but also nanoplastics posing a challenge in the future. The suggestion offered was that public should change their behavior and turn to conscious consumption. Moreover, the design of products should be considered: if it is necessary to include as much plastic in it as is currently applied.

The human factor was also highlighted by the representative of Estonia. Mait Kriipsalu from the Estonian University of Life Sciences argued that behind the technologies that allow Estonia benefit from the clean drinking water from the tap there should always be qualified people.

Discussion of tendencies was continued with a remark by the speaker from Costa Rica:

“We discharged as lot of pollutants to the water bodies, because we considered water bodies to be ready for it. Now, when we talk about recycling, we start thinking about safety and become more careful in how to deal with this water, and what extra treatment is required”

Communicating beyond the borders

To bring up the positive regional developments done through transnational projects, the IWAMA project organized a separate session on smart wastewater management examples in the framework of the Eco-Tech conference.

During the session, the representatives of the project presented several outputs: the benchmark of the WWT performance in energy and sludge for the Baltic Sea Region and two examples of project investments. One of the investments has been implemented in Gdansk and represents an anammox-constructed pilot wetland plant. Another investment was done on Grevesmuhlen WWTP in collaboration with the aqua&waste private company – the presentation highlighted benefits of applying modelling and introduced the decision-making tool developed in the project. Moreover, the session demonstrated to participants the Baltic Smart Water Hub as a platform for gathering and coherently presenting regional highlights in the water sector. 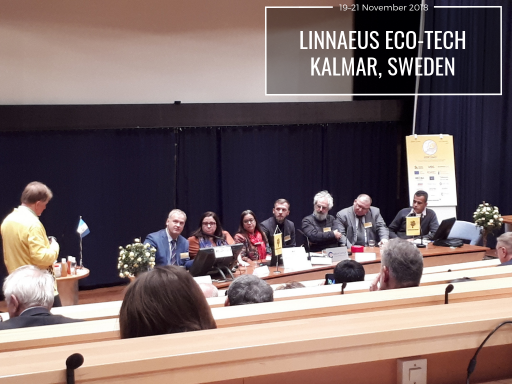