Earlier in autumn, IWAMA organized the first workshop among the events planned for the project’s lifetime. The 1st International Capacity Development Workshop took place in Lahti, Finland, on 20-21 September 2016. The event was hosted by the Lahti University of Applied Sciences.

The agenda of the workshop addressed the problems existing in the capacity-building sphere and suitable tools that could help to develop and improve it. Already at the start of the meeting the organizers held a group work that helped to both identify the major challenges in the local management of the WWT field and re-establish professional contacts among the participants. The groups included representatives from different countries and expert backgrounds, and together they formulated several major trends during the brainstorming session.

The obstacles that appeared to be most common for the WWT sphere are aging infrastructure and lack of investments and specialists. Another problem emphasized by many was knowledge: information, technologies and new ideas need to be disseminated in the sphere to increase its efficiency. “We need cooperation between technological companies, WWTPs and universities,” stated the workshop group that united representatives from Germany, Sweden and Estonia. “We need to connect people who has the knowledge to people who actually needs the knowledge.”

The matter of disseminating knowledge was raised further in the group work and throughout other discussions of the Workshop. Spreading knowledge requires organizing life-long learning education centres, which can take various forms. Simultaneously, the background of the cities participating in the meeting was quite diverse to make a unanimous decision. While in half of the countries having special courses or schools have been a long-term practice, it was not as popular in others. The role of national knowledge-based communities in different countries was further discussed in the form of presentations.

The IWAMA Workshop was focused on concrete solutions to the existing problems, which was referred to in the chosen format. Thus, among other activities, a visit to the local wastewater treatment plant was organized for the participants. The opportunity to watch how waste water is managed in various cities in different conditions and exchange experience with local WWT operators is an important part of the project. Providing practical knowledge on both professional matters and about the implementation of the project was on the agenda of the meeting. Presentation materials from the workshop can be found here.

One of the clinics prepared on the first day of the Workshop highlighted the Baltic Sea Challenge project. This project is an encouraging network for any organization willing to take a challenge of making the Baltic Sea a cleaner and more effectively used shared resource. All the IWAMA partners are required to make a commitment in the framework of this project and later spread the information about the Baltic Sea Challenge in their networks. BSC is not only an important tool and force to undertake measures to save the Baltic Sea: it is also a great source of information and inspiration, as all the fulfilled commitments are promoted in this project.

During the Workshop in Lahti, the project partners disseminated, collected and discussed the questionnaires that have been formulated to fulfill the IWAMA goals. In the later stages of the project they will be assessed to produce concrete results on the WWT performance. 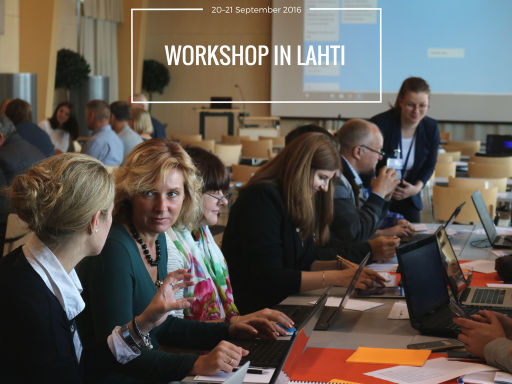